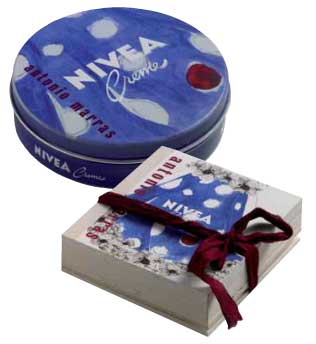 Sometimes it happens that high and low meet in the middle, that luxury and the mass market intersect, that haute couture and packaging join forces and generate worth. It happens above all when the protagonists of the new edition of Nivea Glam are a cult cream and a visionary couturier such as Antonio Marras.

Marras’s style is unmistakeable, both in the world of fashion – where he is a unique case in Italy with his imaginative and unconventional idea of fashion – and in those other cultural and artistic activities in which this tireless creative man is constantly involved.
The key elements of his work are the story, ornament and a revival of craftsmanship.
At the root of every collection there is always a narrative idea, a story, often focussing on people and events linked to Sardinia, the place where he has chosen to live and work, far from large cities and the most important centres of finance.
Recurring and deeply-felt themes are identity and difference, travel, nostalgia and loss but what makes his clothes speak, what constitutes its communicative aspect, is ornament, for which the designer declares an unbridled passion.
Thanks to ornament the form may involve us emotionally and physically. This leads to a genre of fashion, such as that of Marras, which is lavish with details, sartorial works which require extraordinary manufacturing techniques and often call on the knowledge of the artisans of Ittiri, keepers of the Sardinian tradition of embroidery.
Story, ornament, craftsmanship.
Marras has used the same ingredients in order to redesign the packaging for the special edition of Nivea cream.
The protagonist of this story is a stylised female figure with a retro look and dreamy eyes who changes clothes on every page, while the legendary crème, redesigned with maxi polka-dots on a blue background, continues to peep out from the cut-out window, until, on the last page, the Nivea-doll actually comes into life. Indeed, she can be removed from the book and dressed like the paper dolls we used to play with.
The book is held together with a ribbon made of burgundy cloth and comes in an ecru canvas shopping bag which appears to be hand-drawn. The whole has an extremely sophisticated and well-crafted look and is produced in a limited series of 2,000 numbered pieces sold at a price of 30 euros.
It does not matter what the response is. In this case the fairy tale has a happy ending as both the designer’s fee and the sales profits will be donated to Emergency in order to back an important project: the creation of a children’s surgical ward at Lashkar-gah hospital in Afghanistan.

Antonio Marras, you have dressed the packaging of a historic and highly popular product like Nivea cream in your own style. Can you explain how this partnership began?
The offer to invent a limited edition of the ultra-famous Nivea cream arrived exactly one minute after I had promised myself once again never to accept another offer of work due to having far too much to do. But the instinctive liking I feel for this white cream, that oh-so familiar image and that unmistakeable perfume, meant that, once again, I was unable to keep the promise I had made to myself.
For a curious person and style lover such as I am it was impossible to resist the temptation to “desecrate” this true, immutable icon. Is there anyone anywhere in the world who wouldn’t recognise this blue tin with its white lettering, unchanged for over 50 years, one of which is found in every home? Indeed, it is no coincidence that I wanted to work on the most classic packaging, excluding the handbag version, which is very pretty and practical, but already far too “fashion” and modern compared to the project I had in mind.
The first instinctive idea was to “dirty” the severity of the blue with white polka-dots and to give it a texture thick to the touch. In concocting a box to contain it the idea gradually emerged of a book-object-doll who comes to life on every page. In the end one might say that the container has almost got the upper hand compared to the original object we were asked to work on, taking into account the fact that it all comes in an ecru canvas shopping bag with a print that looks handcrafted.

Speaking of packaging in more general terms what does packaging mean to you within the context of contemporary taste?
For me it’s fundamental! I have bought things merely because I’ve been absolutely fascinated by the packaging that contained them and totally uninterested in the content… On the other hand, I have always paid a great deal of attention to what is required in order to announce and communicate the object. From the very start I have invested a great deal not just in economic terms but, above all, in philosophy and creativity, when designing the invitations to my shows. As I treat my collections as though they were stories to tell, the shows are the backdrop to the story and the invitation is a kind of introduction. The same thing goes for packaging.

What is luxury? A lifestyle, product quality, a mental state…
The word luxury, taken by itself, is meaningless. It is too broad and generic to have a unique and shared meaning. Luxury understood merely as a costly object seems to me to be very far from being a mass phenomenon, above all in these times of real hardship. Only luxury palliatives can be defined in those terms.
Personally, the luxury I most aspire to is time: not free time, mind you, but time to manage to do all those things I would like to do and dedicate more time to.

The world of fashion increasingly dialogues with that of contemporary art. How do you see this relationship considering too your direct, personal experience such as your partnership with artists like Maria Lai, Claudia Losi, Carol Rama and the events which you create every year on the occasion of Trama Doppia?
I think that today these categories should be partly redefined. It is no longer a question of lending or reciprocal interest. What happens is that the boundaries between art and fashion become increasingly blurred to the point that there is a whole swath of intermediate experiences, difficult to classify in one or the other environment. Personally, I have always felt the strong necessity and importance of working on spaces of autonomous creativity. Freedom is a luxury which allows me to create something which is transversal to fashion, something which emerges from independent moments in my life, as in the case of meeting Maria Lai or Carol Rama. Their mode corresponds naturally to what I have always created. I am certainly someone who is lucky to do what he loves: a job which allows me to mix everything, clothes, music, theatre, cinema… I have just thought of an episode involving Maria Lai herself. Once I told her I was going to copy one of her designs. She replied “Art is continuous theft. Don’t worry, I steal from all over the place. When you steal something the work becomes yours”. There, perhaps the relationship between art and fashion could be summed up in that image.

In your opinion, what role does fashion have in our society and which direction is it moving in?
Fashion is one of the most efficient means we have of self-representation and therefore it has an extremely important function, even though for most people, including, sadly, those who hold in their hands the fate of the Italian economy, it is a frivolous and insignificant act. It allows us to announce our ethnic group and political, ideological and cultural affiliations but it also allows us to play with appearances, to construct and deconstruct the identity we wish other people to see. More importantly through fashion we can symbolically elaborate change, passing time, the reality that is transforming us at an increasingly rapid pace. We can agree to leave the past behind, to open the door to the present, to look to the future.
Given the critical economic situation we are forced to face, the need for fashion is destined to have more and more influence on the demand for products distinguished by true identity and unique design.
From this point of view Italy is currently unable to compete with other countries who have made experimentation and innovation their strengths.
Therefore, this sector’s potential for growth seems to me to be linked to its ability to renew itself by expanding its creativity. That is what I wish for the good of the sector and for its positive future development.