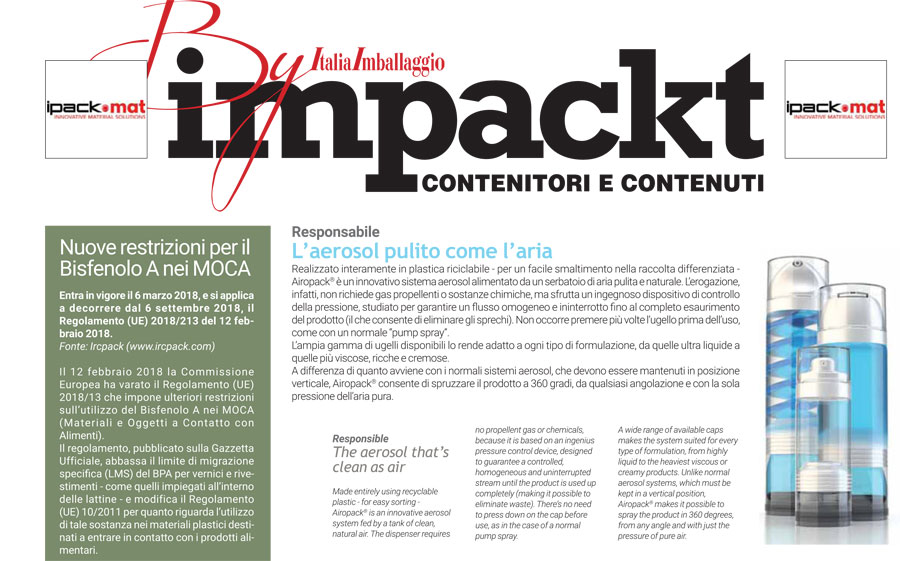 Browse the supplement on line…
END_OF_DOCUMENT_TOKEN_TO_BE_REPLACED

The Fraunhofer Institute for Microstructure of Materials and Systems IMWS and its partners have tested materials that can replace microplastics in cosmetic products and are biodegradable.
The goal was a cost-effective production of biodegradable cellulose particles from beech wood, oats, wheat and maize that meet the requirements for abrasiveness and cleaning performance in dental and skincare products. 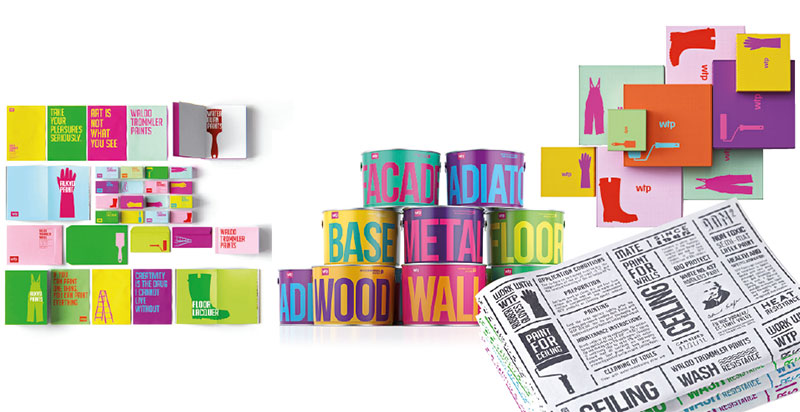 Even though with only a brief entrepreneurial history behind it, Waldo Trommler Paints – a small Finnish colors and paints producer  – has decided to open in the USA and aims at packaging as a visiting card, with the firm intention of standing out from everyone. Leveraging on this principle, with the intent of highlighting the features of cordiality and quality of the company, as well as their innovative spirit, Reynolds & Reyner have designed a packaging line that is original in its simplicity and immediacy.  Indeed the identity of each products and a broad range of bright colors that determine the identity of each product, according to the various sectors of use. (www.awwwards.com)
Waldo Trommler Paints, packaging design system and brand identity by Reynolds & Reyner (2012) 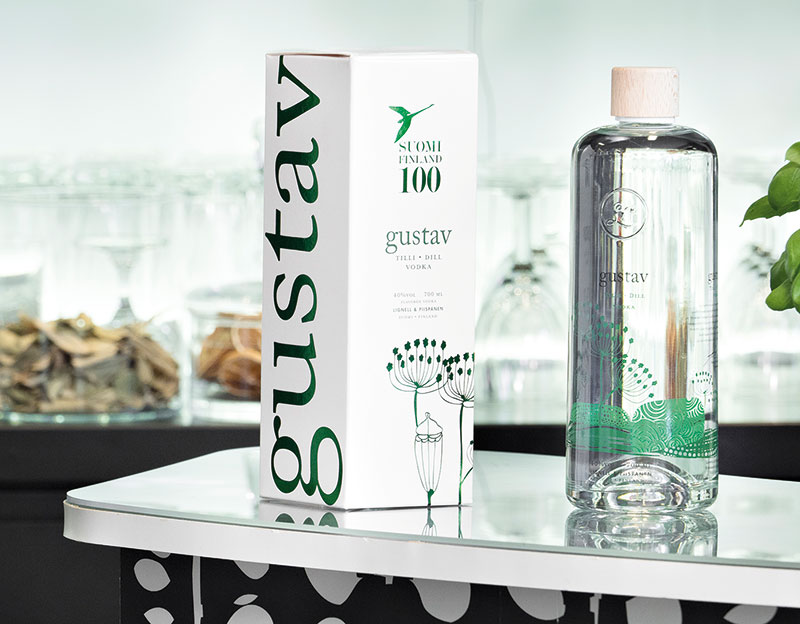 Gustav dill vodka by the Finnish distillery Lignell & Piispanen took the podium at the International Wine and Spirits Competition (IWSC) in London. Conceived by Finnish designer Jaani Vaahtera, the heavy bottle reflects the pure essence of a spirit with an original and perfect taste. In line with a high-end product, the box had to ensure maximum protection and resistance in addition to excellent printability: goal guaranteed (and achieved) by the Kotkamills papermill, that devised a thick cardboard (basis weight of 450 g/m2, 800 micron thick) that could be called light cardboard for its category, in that it protects the bottle effectively while weighing less and providing a much better performance than the alternatives in laminated corrugated. 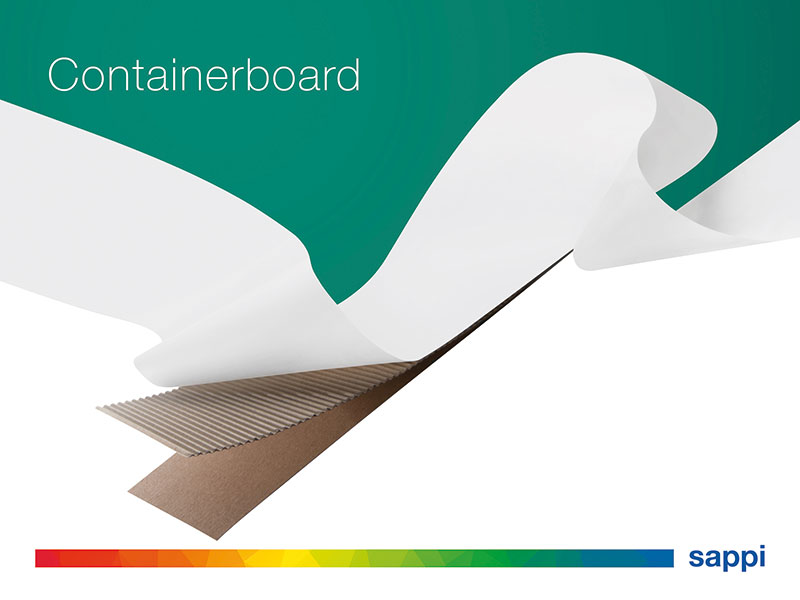 Sappi expands its container board product range and with Fusion Uncoated, offering a fully bleached fresh fibre uncoated liner in the corrugated board market. Its ideal applications include corrugated board and carton packaging, requiring a high white appearance for the topliner, inner liner and fluting.
Fusion Uncoated is approved for direct food contact and is recommended for use when branded product manufacturers, designers and corrugated board processors are seeking an alternative to brown liner papers. These applications include inner packaging such as white corrugated board inserts for high-end perfume boxes as well as food packaging.
These often-unprinted cartons present a luxury surface finish thanks to their high level of whiteness. Other application’s include display and shelf-ready packaging, for which uncoated paper finishes are often the preferred option. 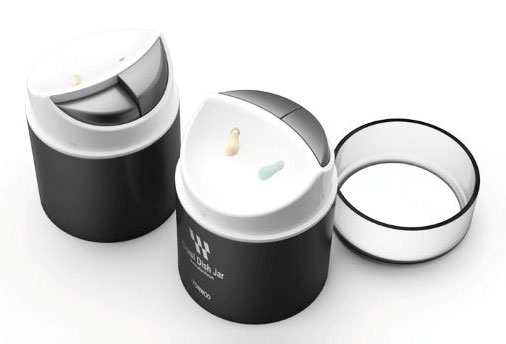 The airless Dual Dish by Yonwoo (a Quadpack partner) for moisturizer and foundation – but practically any combination of two cosmetics is possible – lets you choose in the moment.
A pump dispenser releases the products separately in a central dish where they can be mixed and applied with one’s fingertips or with a brush. Large buttons on the top can be pressed with ease to dispense a small quantity of one or both products, while a smooth, easy-to-clean dish makes it possible to easily mix them. The formulas are contained within two flexible airless bags. Patented Yonwoo technology prevents contact with air, protects against oxidation, reduces the need for artificial preservatives and extends the packaging’s shelf life.
The vacuum pump dispenses 100% of the product with zero waste. Available in 45 ml and 60 ml formats, Dual Dish can be easily personalized with decorations on the walls, mixing dish and top. 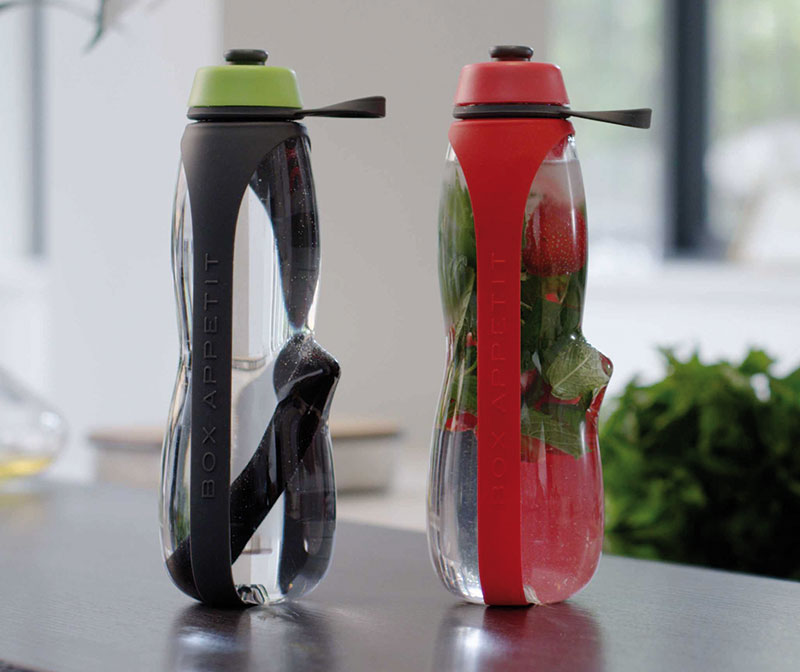 The award-winning London-based design company Black + Blum has launched a reusable water bottle on Kickstarter that features an attractive and functional design. Eau Good Duo combines sustainability with food safety, an essential goal for an increasing number of on-the-go consumers who care about taste but also about the environmental impact of one-time use bottles, by using TritanTM copolyester made by the US-based Eastman.
Made with no BPA or BPS, the material guarantees a long life cycle and neutral taste. Furthermore, it features the perfect mix of rigidity and flexibility, enabling the agency to design a creative and secure system for attaching a Binchotan active coal filter inside the bottle, which removes impurities and softens the water, while at the same time enriching it with minerals. 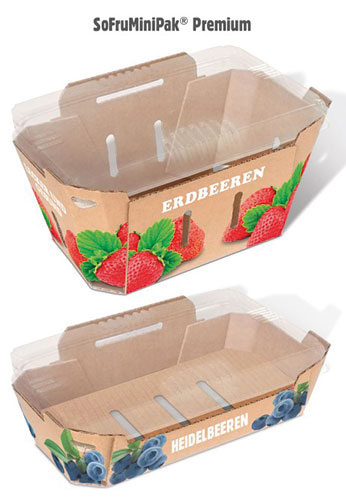 SoFruPak Witold Gaj offers a new Premium version of its cardboard packaging SoFruMiniPak®. The novelty is represented by a clear plastic lid, delivered separately, that can be attached to cardboard container either manually or automatically after the fruit has been packaged.
SoFruMiniPak® Premium is designed for berries, stone fruit, tomatoes and mushrooms. Three versions are available: 500, 250 and 125 g.  User-friendly for consumers and packers, the product has patents pending in the EU and USA.

The Turkish company Deka Plastik has developed Trendlife Gold MA/MH, It releases nano-sized compounds into the modified atmosphere in which the fresh product is placed. Nanotech compounds released from the bag film into the atmosphere react with excess water molecules released by the product. These nanotech compounds, or nanotubes, can destroy excess water molecules and maintain a specific humidity level. The bags control the decomposition process indirectly by reducing humidity inside the bag.
Deka Plastik also developed a special version of Trendlife Gold to inhibit the growth of pathogens and prevent infections, particularly during the most critical storage phases, and bags capable of delaying decomposition by releasing antimicrobial substances.

The second edition of the Nielsen/GS1 Italy “Osservatorio Immagino” survey once again takes a snapshot of trends in the offer of consumer products sold in Italy as well as consumers’ shopping lists, identifying emergent trends and phenomena in the Italian mass market. In particular, the study observed changes in the nutritional profile of 40,000 products sold in pharmacy food, fresh, cold and beverage areas. Using these statistics, the researchers were able to define a meta-product (Figure 1), a “nutritional super-sandwich” illustrating average nutritional values. According to Immagino, Italians are buying more fiber (+2.3% in the year ending in June 2017), reaching 2% of the meta-product. The remainder is divided among 20.8% carbs (8.5% of which sugar), 8.6% fats (30% saturated fat) and 6.2% protein (the focus of a broad target of consumers, including athletes, and vegetarians/vegans seeking alternatives to animal proteins).

Informing and knowing. In a socio-economic scenario undergoing profound and rapid changes, highlighting the changing nutritional profile of Italians’ purchases means clarifying how we react to the stimuli of new lifestyles and food consumption habits. It also makes it possible to understand what the most advanced market paradigms are in order to respond to them with products developed ad hoc. «Only six months have passed since the first survey, but interest in nutritional information has continued to rise, and with it the pace with which new consumption trends and phenomena are emerging. Which of these will have a lasting effect? Which bubbles will burst? Osservatorio Immagino – explains Marco Cuppini, research and communication director GS1 Italy – has proven to be a useful tool for finding answers to these questions, but also for posing new questions.
The thousands of products surveyed by Immagino, in-store data scanners, families’ purchases and media use make it possible to perform big data analysis, which has less to do with quantity than with the potential of providing timely and useful information for businesses to innovate and take concrete action. In an age in which time passes more quickly than ever before, that’s no small matter».