Chris Gilmour Born in the UK in 1973, Chris Gilmour studied at the University of the West of England before moving to Northern Italy in 1996. He is a sculptor who specializes in hyper realistic, life-size objects made solely from cardboard and glue. His work as a sculptor has always been accompanied by a broad range of community and educational projects with children and adults. He has held numerous solo and group exhibitions in museums and galleries throughout Europe and America. In 2006 he won the prestigious Premio Cairo, a prize for young artists organized by Cairo publishing in Italy, and in 2012 he was awarded the Premio Michetti

Raffaella Formenti:  « I  only wanted to write and travel in places of words, but the hands too demanded their space of action, striving to fold the contents of communication in invasive colors, and the association between paper and information technology emerged. Like in a QR code, the “explanation” always lies in the snapshot that follows, in the fold that still needs to be investigated». 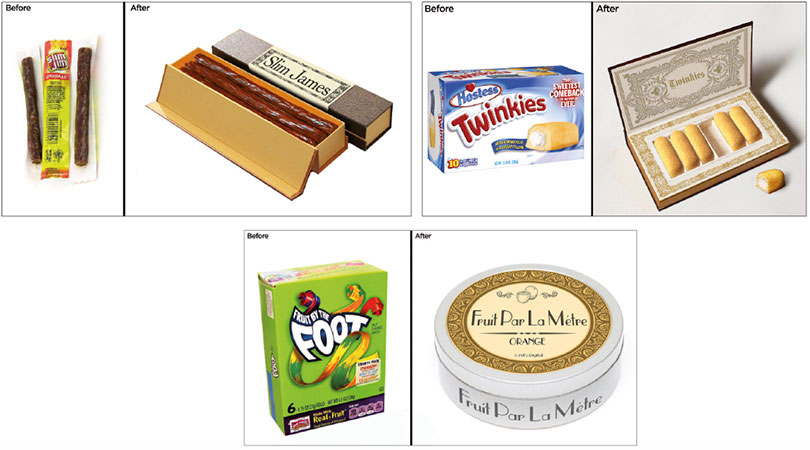 To what extent can shapes, packaging type, colors and fonts affect how a product is perceived? American artist Dan Meth tried to answer this question by “repackaging” a number of snacks that are very common in the USA. By making them appear more hip and refined, the redesigned packaging addressed a much higher end target than the product’s actual one. The before and after shots speak volumes. (Source: darlin.it)

On 16 May, Ghanaian artist El Anatsui’s Earth Developing More Roots, an artwork made using recycled aluminium caps and copper wire, was auctioned off at Sotheby’s for 945,000 USD.