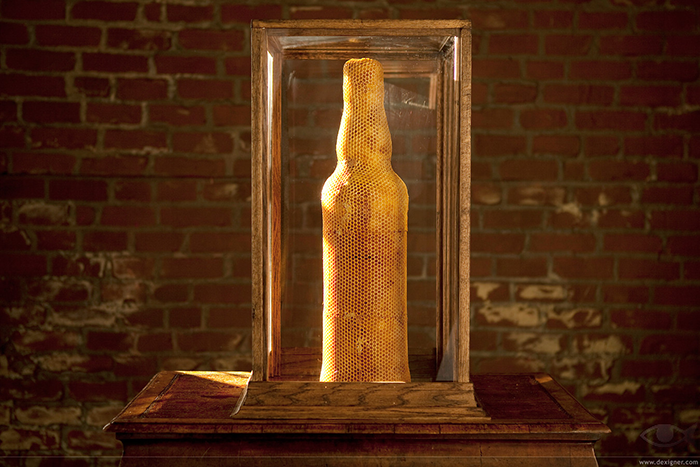 To celebrate the launch of its new honey whiskey, Dewar’s had 80,000 bees create an enlarged copy of the bottle. Under the supervision of an expert beekeeper, the tireless worker bees built the hive following the shape of the mould. The work was completed in around six weeks. An incredible result of the coalition between nature and technology.
When Dewar’s decided to create a sculpture for the launch of Highlander Honey Whiskey, it exasperated the concept of 3-D printing using the ability of the bees and gave shape to an apparently impossible project, the “3-B Printing Project”. But how can you direct a swarm of bees to build a hive in the shape you want? The Ebeling Group (that can boast a reputation for solving the most incredible projects) and master beekeeper Robin Theron were able to come up with the answer. Aboveall the Ebeling team created a 3-D model (press-moulded in the traditional manner) that could be used by the bees as a base on which to build their cells and closed it in a transparent hull, just slightly bigger than the same, so as to reproduce the real space in which the bees move in the hives; this also enabled a perfect view of the “work in progress”. Entry and exit paths for the bees were then created to enable them to search for pollen and, lastly, thousands of worker bees were introduced.
The entire process took around six weeks, requiring two entire colonies of bees, the first of which was completely removed before the second was introduced; aboveall, to avoid the honeycomb filling up with honey and other eggs being laid, the queen bee was kept isolated for a given period. The bees moved around freely and to film them as they landed on the flowers and tools, everyone wore protective masks and overalls. Once the honeycomb had been created, the plastic hull was carefully removed and the end result was surprising and scenic: a splendid bottle-shaped hive.

To be fair and correct one has to cite the Slovak artist Tomáš Gabzdil Libertíny, clearly the source of inspiration of the agency Sid Lee – that followed the campaign for the launch of the new Dewar’s whiskey. Libertíny’s work, carried out in 2007 using a very similar technique, used 40,000 bees and was called “slow prototyping”