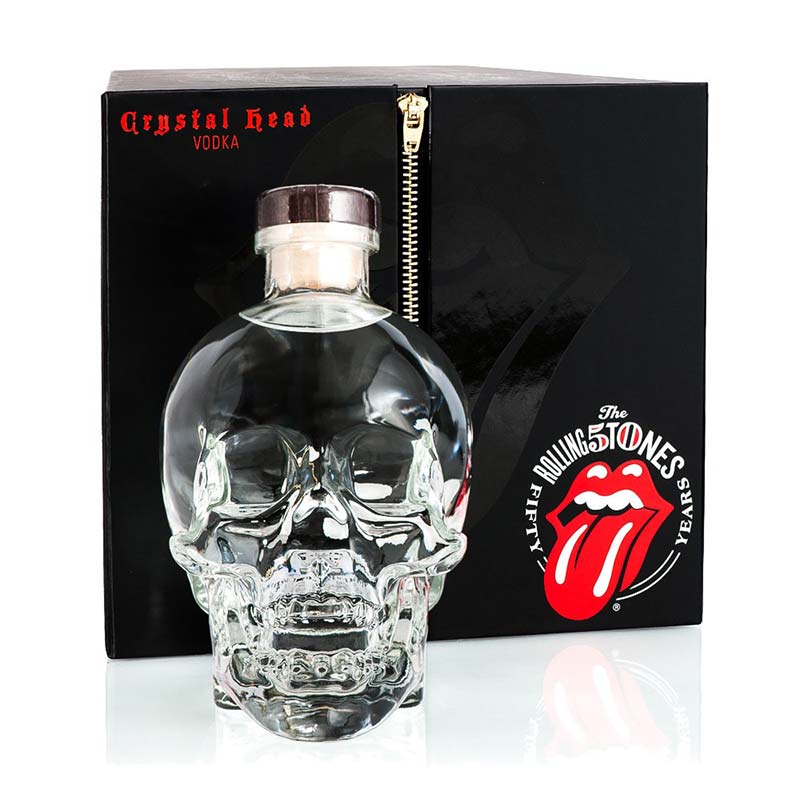 Inspired by the legend of the crystal skulls, actor Dan Aykroyd (ex Blues Brothers) and artist John Alexander have designed the bottle for Crystal Head Vodka with the specific intention of cladding one of the purest vodkas in the world with an outstanding packaging.

Crystal Head Vodka is famous for its selected ingredients of the highest quality, additive free and distilled four and filtered seven times over. Over the last three steps it is purified through 500 million year quartz crystals, the famous “Herkimer diamonds”, found only in very few places in the world.

These quartz crystals are the most valuable, clear and powerful of all the known ones; they seem to have the ability to absorb and radiate energy, and allow one to reach high spiritual vibrations; they are attributed powerful metaphysical properties and are said to be of help in astral voyages because they connect the cosmic to the physical plain.
The mysterious thirteen crystal skulls of a popular Mayan legend were said to be made from this very type of quartz crystal compound. The legend has now been disproven from a scientific point of view, but still very involving and appealing, to the point of being a great cue for excellent marketing.

And it is inspired by this myth that Aykroyd and Alexander devised a glass bottle shaped like a skull that has already become cult. The prototype was built by the Milanese glassworks Bruni and the entire design process lasted more than two years and has had to overcome enormous complexities, but, as it seems, it was worth the effort. After garnering a huge commercial success, the “Crystal Skull” has been in fact chosen by the legendary Rolling Stones as the official vodka for the celebration of their 50 years on stage. Crystal Head Vodka and Universal Music have therefore designed a limited edition box set that presents itself as a display case with zipper, which incorporates the cover of the legendary 1971 album Sticky Fingers. Inside are the distinctive skull-bottle, a cap-jewel engraved bearing the famous Rolling Stones logo and two compilations of live tracks recorded exclusively for this special edition.

In 2013 Crystal Head Vodka was awarded the Gold Medal at the Salon Prodexpo, Moscow, even beating the best Russian vodkas.
The crystal skull is definitely bringing luck.