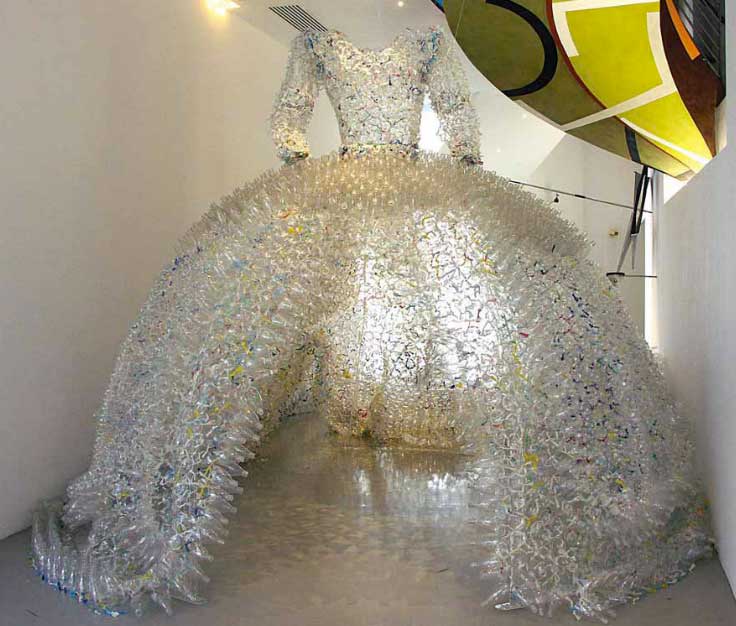 Enrica Borghi’s artwork scrap and rubbish are the prosaic materials from which poetic and magical works are born.

Enrica Borghi, 35 years old, Queen of Recycling, began by creating installations using material for recycling drawn from the female universe (fake nails, rollers, various ornaments) and/or the domestic world (shopping bags, Plexiglas, labels and packaging, empty bottles…)
In 1995 she exhibited fancy women’s clothes and the series Veneri at Galleria Peola in Turin. Then, in 1997, she took part in the group exhibition curated by Lea Vergine Quando i rifiuti diventano arte at the Museum of Contemporary Art of Rovereto. In 1999 she held an exhibition entitled Regina at the Museum of Contemporary Art in Rivoli. Until 30th October 2005) her work is exhibited at Mamac in Nice. With an ambitious project in progress in a dream location – Asilo Bianco – an ancient palace close to Lago d’Orta. The purpose: to represent through different shades of white, through the temporal rhythms and echoes of flowers, clouds and smiles the eternal finites of human existence…

Recycling, manipulation, combination, repetition, pastiche, metamorphosis, magic…In your work different notions merge in complex projects. How far are these dynamic and poetic systems removed from the recycled material which is a vivid basic element in your work?
Recycling and manipulation. I believe strongly in the potential of scrapped objects. Not just things thrown away in the rubbish but society’s rejects too. I like looking at what people define as useless and defunct. My manual skill, the endless time I dedicate to reassembling the scraps is a time for reflection, the magical transformation in which everything can be reintegrated, regenerated. My installations truly undergo a metamorphosis of the object. I shift the attention, the tension to the point where the object can no longer be recognised… It has to be read as having a totally new and magnificent identity. In the case of Mandala for instance I assemble thousands and thousands of plastic bottle tops in a geometrically perfect way, like a precious inlay or a Persian carpet… the work goes ahead for two or three days and then, at the end of the exhibition it is all destroyed in order for it to be put back together again. The idea that this geometrical perfection is liquid and unstable, that it can be shown again in thousands of different shapes stimulates me and gives me the energy to repeat these patterns infinitely… On one hand I am interested in the fable-like aspect but on the other hand the aspect which is not only ecological-environmental but also subtly social is intrinsic…The idea that there not only things but ideas, men, ideologies which are scrapped, held to be no longer fashionable, dated, destined not to have a second chance to be interpreted in a different way… this stimulates me and gives me the strength to work incessantly.

What value does the single object have and what surplus value is given by your ability to sense the soft aspect of a material, destabilise it and release its expressive potential ? How much is salvaged and how much is re-examined?
An object taken singly, destined for the scrap heap, interests me precisely because it was conceived to be used and thrown away rapidly. I am thinking of all that seductive and coloured packaging, the idea of collecting it and rethinking it is suggested to me by the object itself, by its shape, by the intrinsic chemical make-up of the material. For instance, PET bottles immediately made me think of glass, and their ductility to heat for example heightened their infinite working possibilities.
The goods I buy always give me a sense of insecurity.. even food, everything that is consumed, devoured, eliminated creates in me a strong sense of instability and perhaps this is why I decide to lock myself into my studio and lick my wounds for hours on end.

What kind of conflict or complicity do you have with things? Do you perceive immediately that a material is incapable of being part of a project, or rather that it is versatile, open, not bound to the sole physical and functional dimension? Which objects are too far removed from your work?
Which objects are removed? Good question.. certainly those which are a little synthetic, chemical, skinless, lacking in seduction. A material or object isn’t automatically excluded from my work. Sometimes it just needs time. I am not always able to pick up on the potential of a material or instrument which allows me to work, and transform a material. In some cases it is the material itself which suggests emotions, creations and accumulations… In other cases I let the interest in the packaging settle in order for it to resurface loaded with a new value.

Are you simply sensitive to environmental issues or do you have ecological obsessions and fads?
I am a normal member of society who recycles rubbish. Without getting too obsessed I try to pollute as little as I can and to lead a healthy and balanced life. I have chosen with my partner Davide to live in the hills, abandoning the frenzied life of the city, conscious of having to face some difficulties in my work… I have chosen not to be at the centre of the debate… but nowadays the theme of centrality is very much debated and perhaps glocal is very much present in this small town too.
What role does manual skill and technique have in the definition of the work? Do you have collaborators who help you to produce your installations?
The role of manual skill is a significant factor in my work. It is precisely by working slowly and fussily that I manage to recreate its magic. The clothes of 1996 made out of slashed and knotted bags were knitted together and it is by keeping faithful to the spirit of female manual skill that I proceed with my work. Time is no longer hysterical frenzy but becomes something else, rescued from that disposable consumerism I am so seduced by. During the making of large installations people or students from the Academy or Art school often help me. The aspect of contemporary art as a learning experience and shared collective moment is significant in my work… it becomes a collective ritual.

Will you tell me about the magic of yours which worked best?
I think my most successful magic is La Regina at Rivoli. I assembled about 10,000 transparent plastic bottles, rejects. I was helped by the Teaching Department of the Museum and many students and it was done inside the room where we then installed the wok. In this case too, as always happens in my work, the project for an installation for children and the idea of working inside a castle suggested the idea of a Queen to me… the Queen of fairy tales, like a dream, a transparent and intangible apparition. The large room also suggested to me that I should work on something emphatically out of scale.

When you go shopping do you look for a brand and enticing packaging or do you prefer the anonymous product? Do you happen to buy something purely because of the packaging? And do you then keep it for one of your works?
Supermarkets and large stores in general give me a hybrid sensation of nausea and seduction which I would often like to turn upside down in my work. I love going to supermarkets, scrutinising the goods like a private detective.. reading the health warnings, controlling the logos, the colours. I almost always buy something for its packaging and never for its contents… when I am abroad I love getting hold of things which are not sold in Italy, coloured plastic bottles, essentially plastic packaging, from the bag to the three dimensional container… Logically I keep and pile up the scraps which might be useful for one of my works – sometimes they remain piled up for two or three years to then emerge like little acts of magic.

How much of your private world and your dreams are reproduced in your art? Do you have new projects in the pipeline at galleries and museums?
A great deal. I was able to become a queen in a world of rubbish… a queen nobody wanted however… I was able to have precious clothes and jewellery, made of recycled plastic but anyway unique: a kilometre – long bright path with snowflakes as big as balloons, dazzling enchantments, rooms from the Arabian nights. Art allows me to have that famous magic wand all children would like to have.

Will you tell me something of your current work at the Museum of Modern and Contemporary Art in Nice?
The exhibition at Mamac in Nice consists of new materials created specifically for this event. A few years ago I visited an aluminium foil factory and I was electrocuted. I have often collected chocolate wrappers as a fetish but to see them in industrial quantities was a vision. I immediately thought that sooner or later I would use this incredible material. The seduction of this material is truly thrilling: the silvery, shimmering, opaque, shiny, satiny colours like precious silks and fabrics. Visiting the museum of Nice I decided that finally this material might match the place, atmosphere and concept I wanted to explore. On one wall of Mamac I installed about 12,000 little balls wrapped in coloured aluminium foil and arranged so as to compose an arabesque pattern.
The Arab influence is repeated in the carpets on the floor and walls. They were made by twisting the foil into long strings which are glued in a swirls moving outwards. The theme is therefore the curved line, an echo of Nouveau Art, the Belle Epoque and the memory of the Cote d’Azure. A precious twinkle and glow, the sea… To complete the installation there is a room that is entirely covered in blue aluminium with a six metre blanket on which thousands and thousands of blue roses were placed, woven, tangled. All made by hand, like the 12,000 little scrunched up balls. The flowers reminded me of the making of votive paper flowers but also the decadent flavour of the end of the 19th century… a sensation somewhere between claustrophobia and seduction. Roses spill out of the cupboard too, from the lamp, on the table, on the bedside table, again a thin line, the obsession of a material but a misleading reinterpretation of the same.